In our continuing series of highlights from Worldwide ERC® President and CEO Peggy Smith’s Leadership Unplugged interviews at the 2018 Global Workforce Symposium, we listen in on some innovators’ perspectives.
‍

Innovation. It’s one of the hallmarks of disruption done right. When Worldwide ERC® CEO Peggy Smith asked several thought leaders to talk about what’s emerging in today’s mix of advanced technology, mobile people, and creative business approaches, she was the recipient of some remarkable perspectives.

Smith chatted with Tom Dempsey, Vice President, Business Development, Quicken Loans about the proliferation of great ideas, some of which had been incubating for years before they appeared as startup or popup companies. Dempsey spoke about the opportunity that comes from being able to look at one’s business model to find new, better ways to serve customers and add efficiencies - and assume no rules! He pointed out the results that come when innovators can “get outside of the box and really get to what people want.” One example? “Pushing a button and getting a mortgage! The idea that you can harness data and make decisions quickly…it’s exciting to see where technology will go.”

Liam Brennan certainly saw where technology was going when he launched GT Global Tracker. “You came in and did a little bit of a disruption!” Smith said to Brennan, CEO of the company, which helps employers track their business travelers for compliance with taxation and immigration issues. “What did you see that made you think, ‘I can do better?’” Brennan recalled the period when he and his team were studying business travel issues and could see some concerns that were going to be bigger problems over time: “We started to build a product to try and get ahead of the curve.” Brennan noted that their goal was to preserve the current ecosystem so that their customers wouldn’t need to change business processes that involved IT or HR systems, or their relocation management company. By creating a solution that could “just plug into” the enterprises already connected to the business traveler, it was possible to provide analysis of data that’s already there. Smith then asked Brennan what he saw in the area of “bleisure” (business + leisure trip combinations). He noted that’s another area where close tracking of data helps, as “the combination of work and leisure is leading to situations where the time in country might trigger thresholds for compliance issues.”

Smith invited Heather James, executive vice president, Nomad Temporary Housing to share her viewpoint on innovation in the housing industry. James, who sees her company as the “first true, unbiased aggregator,” noted that the business model is to leverage existing temporary housing inventory in the marketplace with bookings that go out to 950 partners worldwide. She noted that technology is an enabler, but even amid all the new platforms coming out, “The pendulum can’t swing all the way one way or all the way the other. It can’t be totally high-tech, it can’t be, ‘oh we’re going to hold your hand the whole way’…there’s got to be this meeting in the middle so that someone gets the benefit of all.”

Speaking with Ben Cross, CRP, vice president, business development for University Moving and Storage, Smith noted that the moving industry—one of the oldest in the mobility space—is often a frontrunner in innovation, and embracing new technologies. Cross agreed, noting such enhancements as accelerating and automating documents, and the use of video surveys. He pointed out that video has other possibilities, too, of a more ‘human’ nature: “There’s a real opportunity to incorporate video into the service delivery model,” Cross said. “So you could send the transferee a video, they can self-serve, but they still get that personal feel of having spoken with someone.”

Elise Riordan, CTO at NuCompass Mobility, has taken a specific approach to technology and disruption. “We’ve tried to leverage those areas with additional augmentation to our platform,” she said, and is optimizing relationships with partners to enhance employee experience and gain productivity. Smith asked, “How are you prepping internally for the transformation?” Riordan responded that the training happens in segments, bringing everyone along incrementally, with the first adopters helping to educate those coming after them. Smith then asked Riordan to project out what she sees for the next few years in technology. “More integrations,” said Riordan, “especially into the HR ecosystem, and trying to tie those systems together. Leveraging other areas that have the expertise, and still giving the transferee an experience that’s all-inclusive.”

Innovation isn’t just the purview of technology – it’s happening on the human front, too. Michelle Velasquez, GMS, CCHP, Corporate Housing National Client Services Director - Preferred Corporate Housing spoke with Smith about the two things that younger transferees and assignees want: control and speed. “Control – to be able to make choices on their own, and to make choices really quick, and get answers really quick,” said Velasquez, noting that they also want to be a part of the overall decision-making process. Velasquez, who has a second leadership role this year as the Chair of Worldwide ERC®’s YP40 community, noted that young professionals “want to talk strategy, be part of the conversation, know what current leadership is saying, and learn how can we drive those goals as well.” She suggested that instead of mentorship, experienced professionals in Worldwide ERC® could connect with younger ones through “pairing;” creating more of an equal relationship than mentor/mentee. Essentially, she said, “We want a voice.”

Having a voice, and being heard, is also important to Kathryn Cassidy, president and COO Altair Global, who rose in the ranks when there were far fewer females at the C-suite level. Cassidy is a frequent mentor to younger colleagues, and said that when coaching them, “My main piece of advice is ‘use your voice.’ And always ask – ask for the job, ask for the promotion, ask for the feedback!” Cassidy has relocated five times in her career, and notes that moving from Chicago to Dallas was just as challenging from a cultural perspective as her move from London to New York. Smith asked how she could use that experience – that she knows the journey in the same fashion as the transferees her company serves. Said Cassidy, “Empathy is a big deal in this industry. Don’t come into the relocation industry if you don’t have empathy, because you really do need to put yourself in the customers’ shoes.”

Another female pioneer is Ebru Demirel, president of Asya International Movers, who comes from a household goods moving family. Though her company also offers destination services, she says the moving side of the business is her first love, and she hopes to bring more women into this male-dominated industry. Pointing out that Ebru is something of a “passive disrupter,” Smith observed that she is breaking through traditional roles and perspectives slowly but surely; steadily modeling female leadership so strongly that she is shifting culture. In 2019, Demirel is poised for a massive glass ceiling moment when she steps into the presidency of FIDI. She will be the first woman to hold this distinction since FIDI was established nearly 70 years ago, and remarked, “I hope I will bring a different view and approach. I hope I will bring value to the FIDI family.” “I have no doubt you will,” said Smith, and asked if she’d like to share some special wisdom with women in the industry. Ebru noted that it’s important to stay focused and push through prejudice and challenges to diversity, saying “Regardless of gender, if you do what you do with a great love, with a good intention, you will be successful.” 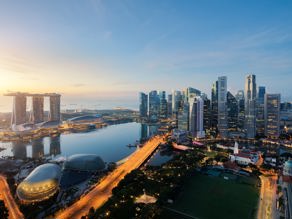