The Benefits of Diversity in Business

Learn how to pursue diversity and drive innovation and greater financial performance in your global organization.

We live and work in a melting pot of diverse languages, cultures, generations, politics, sexual orientation, abilities (and disabilities) and so on. Embracing that mix of diversity, it turns out, is good business.

“In an increasingly dynamic business environment,” BCG researchers noted, “that kind of turbocharged innovation means that these companies are better able to quickly adapt to changes in customer demand.”

Millennials, who are expected to comprise 75% of the global workforce by 2025, want to work for companies that demonstrate a culture of diversity. Nearly half (47%) say diversity and inclusion are important factors when considering a job. In a time of critical skilled labor shortages, exhibiting above-average diversity can be a recruiting game changer.

Benefits of Gender and Ethnic Diversity

Did you know that return on equity in Fortune 500 companies that have at least three female directors is 500 percent greater than for other businesses?

The positive impact of gender diversity can also be seen far beyond the boardroom. McKinsey & Company found that the correlation between gender diversity and higher financial performance ran from the boardroom, to the executive team, and extended through staff and line roles. That said, its researchers found that “having gender diversity on executive teams, specifically, to be consistently positively correlated with higher profitability across geographies in our data set, underpinning the role that executive teams—where the bulk of strategic and operational decisions are made—play in the financial performance of a company.”

Ethnic diversity plays an equally critical role in business success. Companies with the most ethnically diverse executive teams outperform their peers by about a third. And those with an ethnically diverse boardroom report 43% higher profitability. Driving the correlation between diversity and profitability, according to McKinsey’s research, is that “more diverse companies are better able to attract top talent; to improve their customer orientation, employee satisfaction, and decision making; and to secure their license to operate—all of which we believe continue to be relevant...”

A diversity program that drives true business return must start with a true commitment to diversity and inclusion at the company’s highest levels. Says Boston Consulting Group, “To successfully capture the benefits of diversity in the workplace, companies need true leadership commitment – which is much more than superficial words or platitudes.”

Organizations must build, support and embrace an inclusive culture where a diverse mix of employees is welcomed and encouraged. That culture must become imbedded in the company’s core.

An effective program should be measurable and meaningful. Correlate key financial metrics to diversity and inclusion, by tracking and measuring performance across organizational priorities. Hold individuals – including, perhaps most importantly, leadership – accountable.

And involve stakeholders in building and refining a diversity and inclusion program that is not only measurable, but meaningful across the organization.

Empowering Female Representation in the World of Work

The importance of female representation has skyrocketed in importance, but there is still much progress to be made fo... 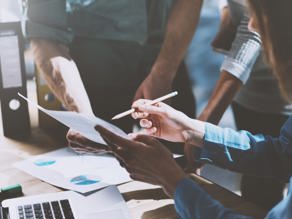 Rethinking Talent Management After an Unprecedented...

New research reveals that despite the increase in remote work, employers expect an increase in demand for global mobi...